Being a mostly UDP-based protocol has its advantages: It is a lightweight protocol in comparison to TCP, tends to run faster, and is less resource intensive. However, UDP is much easier to spoof than TCP, meaning an attacker can craft a UDP packet with any source IP address easily. Figure 2-3 illustrates this type of source IP address spoofing that is easily accomplished with UDP. This type of source IP spoofing is also known as “reflection”, is discussed in more detail in DDoS Attacks. 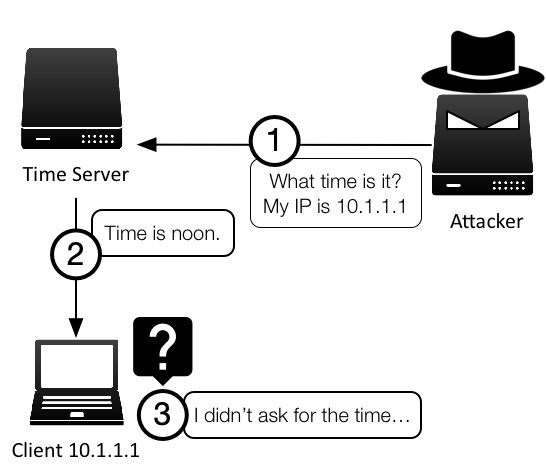 When a recursive name server makes a query, it sets the value of five (5) fields. If the response to the query matches the values of the five fields, it accepts the answer as legitimate. It then returns it to the client and stores it in its cache.

As it turns out, four of the fields are easy to figure out and spoof, so only one field is actually meaningful: the Query ID (also known as the TXID). By most computing standards, the Query ID has relatively few possible values. It is a 16-bit number or a value between 0 and 65,535. This makes it possible for an attacker to initiate an information request on a recursive name server, then immediately spoofs the responses, in order to continue to try firing a lot of responses with different Query IDs.

Figure 2-4 illustrates how this weakness was leverage in the well-published cache poisoning attack discovered by computer security researcher Dan Kaminsky in 2008. 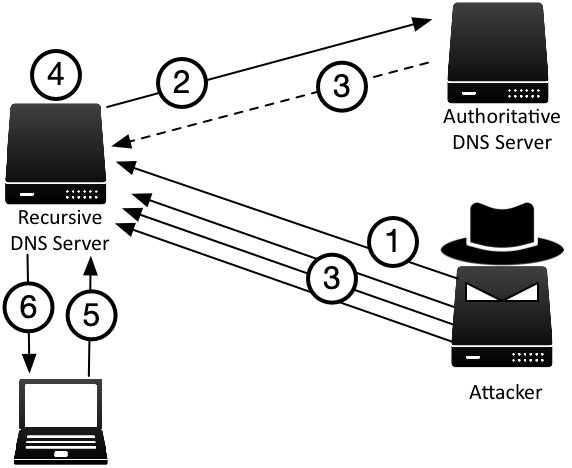 A well-crafted Kaminsky attack can insert a bogus entry in the cache within minutes. He discovered new the vulnerability in the DNS protocol, and he used this to create cache-poisoning of records that aren’t even in the attack query by exploiting the Authority section and the inherent and necessary use of sending A records (called Glue records) when returning NS records for name servers. To make matters worse, the attacker could choose to poison an NS record itself, thus taking command of an entire domain rather than just a single entry.

UDP-based weaknesses are well studied, and there are generic network-based solutions that can be implemented independently of DNS. For a DNS-specific solution, please refer to Issues and Threats – DDoS Attacks on limiting the effect of source address spoofing in DNS.

As for cache poisoning, a very DNS-specific attack, the most common fix is to update the DNS software so that queries are sent from more random source ports. This effectively lessens the chance that an attacker will successfully guess all five (5) fields in the answer. In addition, this also results in it becoming much more time-consuming for the attacker to carry out this attack, what used to take minutes, now takes hours or even days. However, there is no sure-fire way to guard against cache poisoning, and no software updates can fix this issue once and for all. Software exploits can be patched with software updates, but protocol weakness can only be updated with protocol fixes or extensions. DNSSEC is the “fix” for the traditional DNS protocol.

DNSSEC addresses this problem as it creates authentication of the sender, and provides a pathway for receivers to validate the answer all the way up to the root.